Scale the heights of Scala, on the Amalfi Coast, to enjoy an exclusive picnic in the enchanting ruin of Sant’Eustachio, organised by Belmond Hotel Caruso.


Away from the bustle of the Amalfi coastline is an extraordinary lost world. In the lush Ferriere Valley, an exceptional mix of environmental factors has created an enchanting sanctuary, seemingly suspended in time.

To reach it you begin in Scala, a quiet medieval town located almost vertically above Amalfi, balanced on the hill opposite Ravello and Belmond Hotel Caruso. Scala means “stairs” and a common sight is donkeys, laden with sacks, clopping up and down the stone steps that link the town with Amalfi. Scala may be sleepy now, but it was once an important outpost of the Amalfi Republic, a fact evidenced in its faded palazzi, its huge Romanesque duomo and the imposing Sant’Eustachio church, now a commanding ruin.

Standing high on the hill, Sant’Eustachio’s shell emerges in dawn’s dewy light like a ghostly presence; at dusk it glows pink in the sun’s last rays. From the tranquil grounds, where the only sounds are bird calls or the buzz of insects, the views of the lush valleys plunging down to the coast are truly mesmerising.

But let us interrupt your reverie for a moment to tell you about our plan. We’re taking you on a picnic. In the company of a sturdy donkey, carrying the feast in its panniers, you’re going to follow the ancient path from Minuta—a hamlet of Scala—to the ruin of Sant’Eustachio.

The church was built in the 12th century by the wealthy local d’Afflitto family in honour of the Roman martyr Eustace, from whom they believed they were descended. (The name d’Afflitto derives from the afflictions the Saint had to bear after converting to Christianity.) Laid out as a basilica with three naves, its outer walls display star-like motifs of Islamic, Spanish and African influence. The entrance originally boasted two marble lions—these now reside at Belmond Hotel Caruso, the d’Afflitto family’s former home.

Take time to soak up the magic of this vast, silent church, once the most beautiful in all of Amalfi. Lie down on the comfortable pillows we’ve scattered on the grass and feel the majesty of your surroundings. Tear your gaze away to indulge in a delicious spread. Neapolitan focaccia with local cherry tomatoes, mouthwatering mozzarella sandwiches and spaghetti omelette with salami are among the specialities our chef can prepare. Finish off with a decadent slice of Caprese cake and a glass of ice-cold limoncello.

Now you’re ready to begin the descent into the Ferriere Valley. Stroll through lemon groves perched on narrow terraces, pass bowers heavy with grapes until you reach the nature reserve—and enter a prehistoric world.

Fed by the rushing Canneto River and shielded from the winds, the valley enjoys a subtropical microclimate that protects and nurtures rare flora and fauna. The giant, prehistoric fern Woodwardia radicans, considered a living fossil, still exists here. Plants more usually found in Africa and South America thrive, such as the orchid-like Arisarum proboscideum and the carnivorous Pinguicula hirtiflora (don’t be alarmed—it eats insects rather than walkers). You may also spot newts and the rare spectacled salamander hiding in the undergrowth. As you wander past cascading waterfalls and crystal-clear pools, you’ll stumble across ruined paper mills and the ironworks that gave their name to the valley, sometimes barely visible beneath the creeping vegetation.

Before your adventure ends—for soon you’ll be right in the centre of Amalfi—take a short detour to the Aceto lemon farm, where Salvatore Aceto cultivates the sweet, elongated Sfusato Amalfitano lemons so evocative of the region. Think limoncello, mouthwatering citrus cake or mozzarella smoked in lemon leaves. If you’re lucky he’ll offer you something he made earlier.

We can arrange a picnic for romantic couples or groups of families and friends, personalised to your tastes. Start early in the morning and stop for breakfast before heading down the trail, or enjoy a magical sunset spread and linger over the hypnotic panoramas. 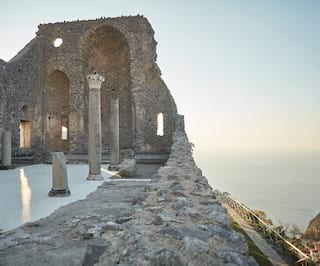 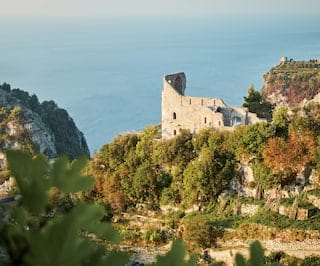 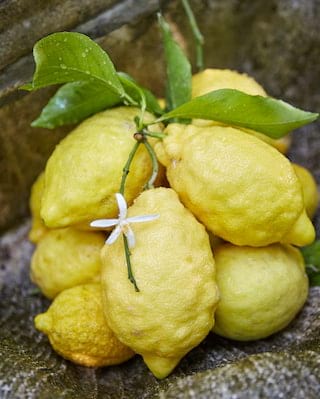 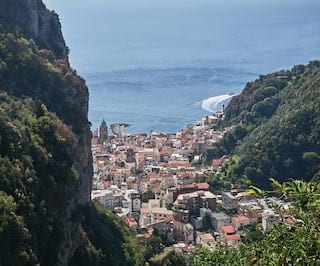