SET BESIDE the rushing Urubamba River, Belmond Hotel Rio Sagrado is the perfect launchpad for many adventures that head off the beaten track among farms and wild, mountain landscapes. But this tranquil hideaway, designed to resemble an Andean village, also has much to offer within its own leafy gardens.

SOAK UP THE HISTORY OF THE INCAS AT MORAY AND MARAS

Take a gentle hike around the impressive Inca site of Moray. It’s one of the Incas’ most innovative agricultural experiments: concentric terraces are carved into the earth to create a huge bowl, where each layer has its own microclimate according to its altitude. The nearby salt pans of Maras, with plots passed down through the generations, are another unforgettable sight, especially when the sun glints off the hundreds of dazzlingly white salt pools etched into the green hillside. For a more adrenalin-inducing adventure, bounce along mud and dirt roads to these ancient sites by quad bike.

The twists and turns through the Andes of the Urubamba River helped to form the beautiful landscapes of the Sacred Valley. The gentle Class I and Class II rapids along the stretch of river near Ollantaytambo make it an ideal spot for beginners, while still packing a heady shot of adrenalin. Beyond the exhilarating whitewater roller-coaster ride and getting drenched in ice-cold spray, there are peaceful sections where you can savour the sunshine as you float between Inca agricultural terraces and buff-coloured canyons under a cobalt-blue sky. After the watery thrills and spills, there’s the opportunity to wind down with a delicious picnic along the riverbank.

SADDLE UP A PONY

Head off for a horseback adventure on a Peruvian Paso, a breed directly descended from the Spanish horses brought to the Americas by Christopher Columbus and one of the world’s smoothest rides. Take a private car to a ranch in Huaran, just 20 minutes from the hotel, then—after a short lesson in how to handle your horse—set off on a scenic ride to Huaran’s small but stunning waterfall. The ride threads through fragrant eucalyptus forests and fields of red quinoa and purple lupins, across gentle streams and into age-old agricultural communities, all flanked by the majestic mountains of the Sacred Valley.

Discover the spectacular Sacred Valley on two wheels: guests at Belmond Hotel Rio Sagrado can borrow state-of-the-art mountain bikes and explore at their own pace. Get off the tourist trail, cycling along gently undulating dirt roads flanked by furrowed fields of time-honoured Inca crops—potatoes, quinoa and corn—and past adobe-and-thatch villages where the locals still wear the traditional, brightly coloured clothes of the Andes. Stop for regular breaks to take in the surroundings, including the dramatic peaks of the Urubamba mountain range and the jagged snow-capped cone of Mount Veronica.

Learn about an age-old Peruvian tradition at a mask-making workshop. Fearsome masks created from materials as diverse as wood, clay, leather and metal, depicted angels and demons were worn for hunting. The Incas sometimes even made them out of glittering gold studded with precious stones. Masks are still used today for celebrations and ceremonies, illustrating Peru’s rich mix of influences, from the highlands to Spain and Africa. After watching a film of flamboyant folk dances from Cusco, including the Capac Negro, which depicts liberated African slaves, younger guests can create their own papier-mâché wall art as a decorative and lasting memento.

GO FOR A PADDLE

Marvel at the snowy Andean peaks from a unique perspective—balancing on a stand-up paddleboard more than 3,500 metres above sea level. With no wind, current or waves, the mirror-flat surface of the Piuray Lagoon near Chinchero is perfect for novices. After a yoga-inspired warm-up and briefing on terra firma, there’ll be time to practise rowing techniques and spins on a relaxed paddle near the shoreline. Since Inca times, Chinchero has been providing Cusco with water through subterranean channels and every year its wetlands attract flocks of migratory birds, as well as jewel-coloured hummingbirds, rare reptiles and, if you’re lucky, elusive pumas.

Pisac’s famous market is one of the liveliest in Peru, especially on Sundays when the textiles, ceramics, jewellery and handicraft stalls that spill down the side streets off the central plaza share the stage with fruit, vegetables and grains. Sellers travel from remote Andean villages from miles around, many in their typical dress. There’s also the chance to witness the Iglesia San Pedro Apóstol’s morning mass said in Quechua, followed by an elaborate costumed procession led by the mayor carrying his ceremonial staff. Follow this with a visit to the atmospheric Pisac ruins—part city, part ceremonial centre—which command spectacular views over the valley.

TRY YOUR HAND AT POTTERY

Peru’s ancient cultures have produced fine pottery for more than 3,500 years: the Chavíns fashioned ceramics based on mythical creatures, the Paracas culture used vivid geometric patterns and the Moche were masters of erotic realism in their ceremonial ceramics, while the Incas favoured utilitarian design. Now you can create your own work of art with the help of soft-spoken, grey-haired potter Pablo Seminario and his wife Marilú Behar at their tranquil workshop in Urubamba. Together, they’ve developed their own unique style, using ancient motifs and techniques and their ceramics have been displayed at the Museo de Arte Precolombino (MAP) in Cusco, as well as at The Field Museum in Chicago.

Fledgling cooks can get their hands dirty in the kitchen after discovering some of Peru’s wild and wonderful ingredients with a visit to the hotel’s organic garden with the chef. Or enjoy a pachamanca, a unique Inca hot-stone cooking experience, in the garden overlooking the fast-flowing river. Meat and vegetables—including pork, chicken, sweet potatoes, beans and corn—are slow cooked for hours over hot stones in a hole in the garden. As well as a delicious dish, this centuries-old Andean ritual is a celebration and offering to Pachamama (Mother Earth), which locals believe brings good health and an abundant harvest.

Budding Picassos can seek inspiration from the scenery on a painting class in the hotel’s flower-filled gardens. The lawns that reach down to the Urubamba River are also home to the hotel’s adorable baby alpacas; young guests can feed and pet these iconic Peruvian animals while learning about their lives and significance since ancient times. 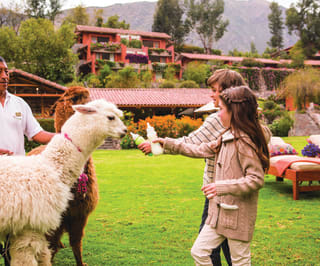 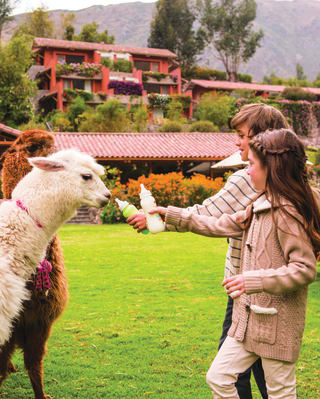 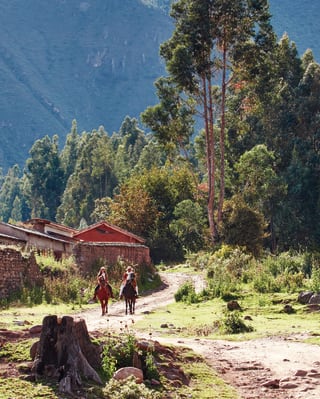