A plush hideaway in the heart of Chelsea, The Cadogan courses with an artistic pulse. Join us as we go behind the canvas and get to know some of the inspirational artists. 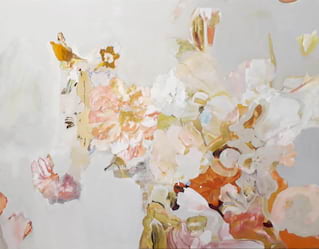 Helen studied Fine Art Painting at the Kent Institute of Art & Design, and won the Dulwich Picture Gallery’s Open Exhibition in 2018. She maps out her ideas on canvas using oils, for their versatility, but uses other mediums including inks, pencils, felt tip pens and collage. Her work explores ideas around identity and perception, creating ‘memories’ from disparate images.

“When I went to the garden, I liked that there were different pockets. Like different rooms you would find in a hotel, each with a unique atmosphere,” Helen explains. “I used that as a starting point for each of the paintings, to recreate the sense of having different sections in a garden.

“I usually paint quite figuratively. But during this process I actually bought a house with my own garden, and all of a sudden, it was all I wanted to paint,” Helen tells us. “Working in large dimensions and to tight deadlines… I found it very liberating actually. You just had to be very confident, and go for it.” 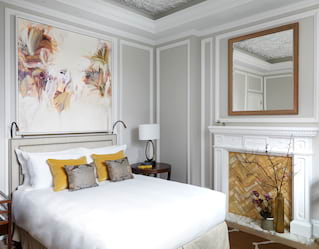 Beatriz channels her knowledge of architecture into her work to create a strong sense of depth. Always using four colours or less, she employs a wide range of media to create ethereal canvases that offer a sense of calm. Her multiple awards include International Artist Award at the 2018 World Art Dubai and the London Ibero-American Arts Award in 2016.

“I worked from many, many photos that I received, but I was lucky that I could also visit an English garden in Italy. That gave me a feel for the composition and spaces,” Beatriz says. “I then channelled my emotions and feelings for the gardens through the use of colour.

“It was fun to paint in a horizontal landscape, that was quite new for me, and for all of us. It got me to play differently with perspective and composition. It was great to open my mind to something new.” 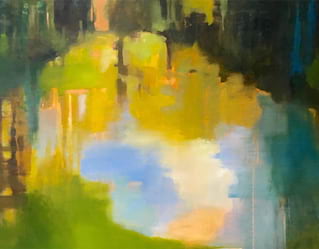 Jane paints full time from her home studio in Teddington. She is grounded in the tradition of realism, but pushes the boundaries of colour and form to achieve a more semi-abstract, atmospheric quality. She paints with oils ‘alla prima’, and themes of light on water and the colours of an evening sky are recurring in her work.

“I think the biggest influence for me was the water in the garden, and the water feature,” Jane tells us. “We used big canvases, and that can be quite intimidating. But by channeling the trees and the water, and deciding that was my direction, I found it easier to overcome that daunting space.

“My art changed during the process of this commission. The scale and time demands were a challenge, but that makes you adapt your style and opens your eyes to new ways of working,” Jane explains. “Actually, I’m anxious to do some more!” 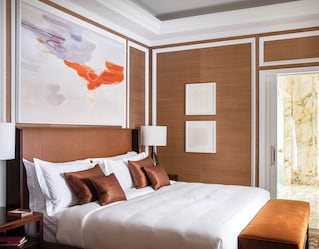 Ele lives in Brighton, and exhibits her work nationally and internationally. She treats painting as a kind of ‘visual poetry’, using abstract mark making to lift and communicate with her audience. She uses a mixture of materials, including paint, fabric and metallics, to build her paintings in an organic way.

“I paint mainly abstract, colour-based work,” Ele tells us. “I was inspired in a sensory way by the gardens. Not just visually, but by the smells and the sounds and the spaces. I was also inspired by the hotel, the different materials and design. They complemented each other.

“The physicality of the work was quite tough, some of these canvases are around 2 meters in height or width.” She explains. “It makes you physically paint differently. You loosen up, and go with it.” 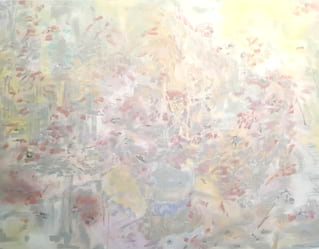 Having trained in London, Kathleen has taught Fine Art at a number of universities across the UK. Her current research is focused around making floral paintings from botanical artist Mariaan North. In 2012 she presented a one-person exhibition entitled “Fade in Fade” at the Tokarska Gallery, London. "I've been painting floral images for 35 years, and we were so inspired in the gardens. It’s a space that I’d look in on through my childhood,” Kathleen explains. “What struck me were the poppies. They came into my drawings; in the expressive marks, in the pinks and reds, in the blowing winds. The end result always felt drifty and dreamy, with quiet colours.

“I actually wanted to be a park keeper when I was a child. Then I went to work in a plant shop, and then I started painting flowers. I think I’ve always had a passion for them.”