Art on the Move in Asia

Discover how the Eastern & Oriental Express caused a stir by bringing a kaleidoscope of colour to the railway tracks.

THE EASTERN & ORIENTAL EXPRESS train always turns heads on its journey between Singapore and Bangkok. Traffic stops, farmers pause in their rice fields and schoolchildren wave wildly from stations along the route.

But earlier this year excitement peaked as the train appeared in a thrilling new guise. Two of its iconic carriages had been turned into a temporary ‘rolling canvas’ of swirling colours by Singapore-based street artist Rajesh Kumar. The eye-catching artwork—The Koi Pond—captured the joy of travel, movement and coming together of friends and family. As Kumar said of his chosen subject: “Koi carp represent many things culturally in Asia—but in this context they symbolise wealth, good fortune and elegance. They also inspire a feeling of Zen, which I associate with luxury train travel. Each fish has unique markings, but they all move together with such grace.”

The concept came to Kumar while sitting in the train’s observation carriage, travelling through Thailand. He describes gazing at the blue skies reflected in the still waters of rice paddies and imagining fish swimming below. A fine art graduate of London’s Goldsmiths College, Kumar transformed the carriages in graffiti style. He saw the project as “a once-in-a-lifetime opportunity—legally spray-painting a train.”

ADDING TO THE OCCASION

How to unveil this vibrant artwork? The train’s maiden voyage in its bright new livery was turned into a travelling party for specially invited guests. Leading mixologist Cocktail Professor created a range of tantalising tastes inspired by sights along the train’s route. Guests gathered in the bar car to sip exotic contemporary concoctions including Coconut Plantation, Malay Jungle and Hills of Perlis. All were served to a soundscape curated by DJ Mr. Has—cool jazz, reimagined classics and deep grooves.

The art carriages spent two months travelling the tracks before their end-of-season repaint. They are now being returned to their traditional green and gold colour scheme ready for their 2017-18 journeys. The new cocktails and the playlist, however, will continue to enliven the train.

Turning the Eastern & Oriental Express into art on the move proved such a hit that the hunt for a follow-up is already on. Prepare to be dazzled and delighted once more. 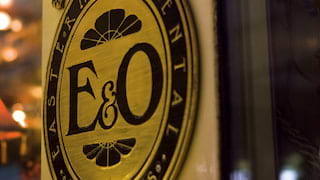 Learn more about the artist's inspirations

Art on the Move

Play the audio described video
Back to top of page