With worldwide devotees and endless award nominations under his belt, Wes Anderson is one of the most pioneering filmmakers working today. Now, fans of the director’s distinctive style can embark on a new cinematic adventure. Discover how Wes Anderson reimagined a vintage train carriage of the British Pullman, A Belmond Train—and how you can step on board.


Angular, symmetrical and intricately designed, Wes Anderson films are known for their exquisite aesthetics and predilection for panache. Just look at the snow-capped pastels of Zubrowka in ‘The Grand Budapest Hotel’, or the whimsically named Ennui-sur-Blasé in ‘The French Dispatch.’

Wes is an expert in rendering fantasy worlds that are a little more beautiful and satisfying than the ones we live in. With relentless details to feast upon and carefully calibrated colour palettes to pore over, his films aren’t just thrilling stories: they’re works of art.

Anyone who has seen ‘The Darjeeling Limited’ will also know that Wes has an affinity for the beauty and excitement of train travel. Starring Owen Wilson, Adrien Brody and Jason Schwartzman, the film sees three brothers reuniting in India and embarking on a luxury train journey together.

“I have often had the chance to invent train compartments and carriages in my movies,” Wes tells us. “So I was very eager to make something new while also participating in the process of preservation which accompanies all the classic Belmond train projects. They are keeping something special alive. An endangered species of travel which is nevertheless very suited to our time.”

Cygnus—a carriage built in the 1950s—has its fair share of cinematic history, featuring in the 1972 film Agatha starring Dustin Hoffman and Vanessa Redgrave. It is one of eleven on the British Pullman, whose carriages have hosted royalty, carried statesmen and survived World War II bomb raids over the years.

With his love of trains and passion for craftsmanship, Wes was tasked with balancing the history of the Cygnus carriage with his own bold and modern vision. The result is a carriage straight out of one of his films: stunningly symmetrical marquetry, bold rectilinear shapes and a feast of complementary colours.

With a pastel-pink ceiling detailing and a variety of green tones in the carpets and chairs, at first glance Cygnus feels like stepping onto one of the director’s film sets. Stunning marquetry work in numerous wood panels shows sunbeams, clouds, stars and waves.

Bold, sharp lines feature in the shape of the chairs and mirrors, adhering to the angular equilibrium the director is famed for. Eagle eyes will also spot the many swan details, referencing the carriage’s name and history.

Guests can ride in Cygnus on any journey on the British Pullman, a unique travel experience that rumbles across the rails all over England. Whether a murder mystery lunch through the Kent countryside or a sparkling dinner hosted by an up-and-coming guest chef, a ticket in Cygnus means you can experience the Golden Age of Travel while appreciating the beauty of modern design. With two private four-seat coupes or seats in the open carriage, the choice is yours.

Book a journey in Pullman Dining by Wes Anderson 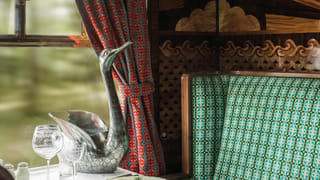 Item 1 of is active
Back to top of page