The Rio Carnival is an annual kaleidoscopic delight, rooted in the very fabric of Brazilian tradition. Bask in the history of the biggest party in the world, where you need to stand out to fit in.


“As she moves, she's like a samba that swings so cool and sways so gentle.” So goes the fabled bossa nova tune, “The Girl from Ipanema,” a loving ode to Rio de Janeiro’s most infamous beauty. Just like the tune’s namesake, the spirit of samba pulsates throughout the Rio Carnival. It’s a joy-filled festa that attracts two million revellers per day each year to the streets of Brazil’s most sun-kissed and storied city.

Partying is a sacred art in Brazil, and the Rio Carnival is the pinnacle of this time-honored tradition. Thrumming with the intoxicating rhythm of drums, the streets pack out for six days in a celebration of diversity. Yet more lyrics from the famed song – “tall and tan and young and lovely” – spring to mind as you observe the dancers igniting Rio’s streets. Skilled showgirls with bronzed skin and wide grins lead samba bands raucously through the city. Here no outfit is too ostentatious, and golden sequins glint in the heady sunshine.

The thrilling spirit of the samba kicks up a notch in the ‘stadium of samba,’ Sambodromo, designed by Brazil's world-famous architect Oscar Niemeyer. But if you don’t make it into the stadium, you’ll still find plenty of cariocas enjoying the atmosphere in street parties known as blocos. On the mosaicked pavements will be celebrants resplendent in feathers, sequins, and every prismatic material in-between.

This exhilarating atmosphere of community and togetherness dates all the way back to 1723, when the first Rio Carnival took place. Each year, dancers, musicians and carros alegóricos (decorated floats) take to the streets, led by approximately 200 samba schools. These groups are formed by various Brazilian communities, who practice year-round. The top twelve samba schools have the added pressure of competition, with the winning squad being crowned the number one samba school in Rio.

The first of these schools formed in Rio in the 1920s, around the same time that the iconic Copacabana Palace, A Belmond Hotel swung open its doors. Samba first began to emerge in Western consciousness in the 1940s, thanks in part to Carmen Miranda’s iconic roles in films such as That Night in Rio and The Gang's All Here. However, the infectiously rhythmic dance has roots that developed far earlier. Differing from ballroom samba, Brazilian samba was created by former West African slaves that were brought to Brazil during Portuguese colonisation.

Influenced by Angolan and Luso-Hispanic music genres, it pulsates with an infectious rhythm and reflects the carnival’s spirit of conviviality. What’s more, it symbolizes samba schools’ united pride under a common regional background. The dance’s ethos of spiritual emancipation, set to the liberating backing of the bateria (a drum orchestra), is the perfect dance to accompany the joyous parades. United and moving, under the blazing Brazilian sunshine.

THE MOST GLAMOUROUS CARNIVAL IN THE WORLD

Copacabana Palace has long been considered the Golden Ticket of all carnival festivities. Our first ever carnival ball took place here in 1924, one year after the grand opening – that makes 2023 the year that this iconic Rio stalwart celebrates its glittering 100th birthday. An evening that promises decadence, joy and glorious excess, the Copa Ball has always attracted celebrities and bon vivants world-over; previous starry guests have included Veruschka, Orson Welles, Christian Louboutin, Brigitte Bardot and many more. With exciting themes, opulent queens, pioneering entertainment and resolute glamor, there’s no destination more fitting for the world’s biggest party.

In 2023, the hotel is looking back to its vintage past but also forward into the future. Themed ‘The Time Tunnel,’ 1920s nostalgia will meet the technicolour digital future in all its inclusive, beautiful diversity – all filtered through a surrealist lens.

In the video below, watch as supermodel Alessandra Ambrosio and Brazil's most famous drag queen Pabllo Vittar invite Vogue and Condé Nast Traveler to get ready with them for this year's glittering Rio Carnival celebrations at the Copa. 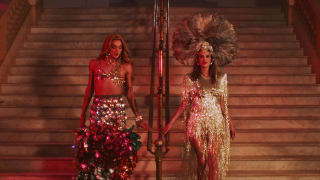 But if you can’t swing a hot ticket to this famed party, you can still celebrate the carnival spirit at the Copa. Legend has it that the word ‘carnival’ stems from the Latin expression carne vale. Literally meaning ‘farewell to the meat’, revellers celebrated a final party before their fast for Lent. Why not be true to tradition, and feast at Copacabana Palace’s Michelin-starred eatery Ristorante Hotel Cipriani? You’ll find a joyful blend of Italian and Brazilian cuisine here, with our celebrated chefs poised to lead you an epicurean adventure. It’s the bona fide way to ease your appetite before the samba spirit takes over.


Back to top of page