Otto Geleng is one of three restaurants at Belmond Grand Hotel Timeo, named after the German painter who resided in Taormina. The intimate restaurant is designed to reflect the style of a classical Sicilian villa and invites guests to dine alfresco on an Otto (eight) course seafood menu whilst taking in views of the majestic Mount Etna and Ionian Sea.

Chef Roberto Toro, a Sicilian native, opened Otto Geleng in 2018. The intimate restaurant warmly welcomes guests through his sensational culinary journey from the fond memories of family cooking to the vibrant colours, scents and tastes of his childhood and embracing authentic local produce.

From zesty home-grown oranges, the fragrance of his mother’s freshly baked bread and his grandmother’s famous tomato sauce recipe - guests discover the traditional flavours of Sicily through a contemporary lens.

To complement this culinary journey through time, the sommelier, Simona Si Goro, hand picks the finest local and international wines, introducing guests to the best secret wineries in the area.

“After many years travelling and discovering different cuisines around the world, I decided to return to Sicily because I wanted to create something important on my island. Today I am excited and proud of this achievement. The Michelin Guide is a desired recognition and I am deeply grateful to my staff for the great teamwork that led Otto Geleng to achieve this goal”.

Otto Geleng restaurant was named after the German painter who settled in Taormina in the early 1860s and was the first to see Taormina as an elegant tourist destination which he depicted in his paintings, celebrating views of the breathtaking bay of Naxos and majestic Mount Etna.

Framed by the terrace and with the bougainvillea in full bloom, the restaurant is set in the islands most exclusive location with the elegant ambience of a classic Sicilian villa - once a place where the noble families would invite their most important guests.

The atmosphere is infused with classic Sicilian spirit with handcrafted linens, Baroque inspired table settings and the iridescent flicker of traditional oil lamps - a grand stage is set for exceptional gastronomy where guests become part of the show.

“Gastronomy lies at the heart of Belmond. It completes a cultural immersion. Our guests travel the world to find authentic tastes in each destination. This award represents a recognition not only for the restaurant, but also for Sicily and for Belmond. I want to congratulate Chef Roberto for his vision and his team for their dedication to providing our guests with this unique dining experience.” Robert Koren, Senior Vice President EMEA, Belmond. 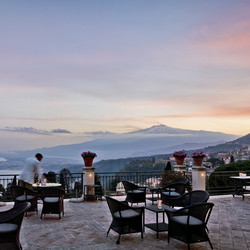