Visit artists at their studios in Deià, Mallorca, in the company of Belmond La Residencia’s expert curator.

A PAINTING PROPPED on an easel outside the door tells you David Templeton is at home to visitors. Enter his studio, just a few steps from Belmond La Residencia, and stroll through his 17th-century home. Each little room is adorned with works by the former Cambridge art professor and longtime Deià resident. They include touching pencil and charcoal studies of British poet Robert Graves, who was still living in Deià when David first arrived in the 1970s—he continues to perform in the P’amb Oli Band (named after the local bread and olive oil) with Graves’ son, Tomás. David claims, “The village allows me the freedom to do whatever I want, which happens to be painting and music”.

Your guide is Cecilie Sheridan, curator of the impressive art collection at Belmond La Residencia. Cecilie, herself an artist, leads fascinating Walk and Talk art tours of the village she has called home since the 1960s.

Cecilie and her late husband, George Sheridan, were the first to make a big impact on the Mallorcan art scene. They, like many, were drawn to the island’s wonderful light and sigh-inducing landscapes and in particular to Deià, a charming enclave of cobbled streets, stone cottages and olive groves, sheltered by the Tramuntana Mountains. Over the next 40 years the couple not only created art but supported other local artists, amassing their works into a dazzling collection. This now has pride of place at our hotel, together with the fabulous exhibition of original Miró artworks on show in Café Miró.

In short, no one is better placed to introduce you to the vibrant artistic community of Deià than Cecilie.

As well as David’s studio, where you might admire pencil drawings inspired by chiaroscuro masters such as Caravaggio and Rembrandt, or impressionist works in the vein of Van Gogh and Cezanne, your tour takes you to the studio of Leila Ward, originally from Brighton, UK. “I came across Deià in 1974 while travelling,” she says. “I fell in love with the place. I adore the ever-present artistic vibe.” Leila’s love of the classics is often reflected in her colourful canvases, which are also influenced by her wide-ranging travels and the beautiful landscapes surrounding her Mallorcan home.

Another well-travelled British artist is Arturo Rhodes, who moved to the village in 1980. You’ll find his green-shuttered, stone-built house down a winding lane past the Archaeological Museum. A former cartoonist at the New York Times and Tokyo Times, Arturo’s annual exhibition at Belmond La Residencia attracts huge crowds. He launches each show of witty, surreal paintings, themed on stories such as Alice in Wonderland, or inspired by Vermeer, with a theatrical performance. “Deià has a very special energy”, asserts the bohemian, yoga-loving artist. Richard Branson, John Cleese and Andrew Lloyd Webber are known to collect his works.

It’s not only long-term residents you can visit on the tour. Meet young creators such as Mattias Duhrssen, who trained as an architect in London before realising his true vacation was to paint. He attended the School of Fine Arts in Barcelona and frequently participates in Belmond La Residencia’s exhibitions along with Australian painter and musician Brendan McCann, and Manuella A Hollo, a Hungarian artist who has developed a local, post-impressionistic landscape style.

Cecilie will also show you round the charming Museum of Archaeology, established by US-born William (Bill) Waldren in 1962. Bill was another artist responsible for Deià’s artistic boom in the ‘60s but he was also a keen archaeologist. Together with his anthropologist wife, Jackie, he set up the museum in a lovingly restored 16th-century grain mill, and filled it with items that he, volunteers and students had excavated locally over many years.

An artistic oasis of rustic beauty 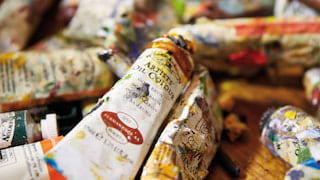 Discover the artistic side of